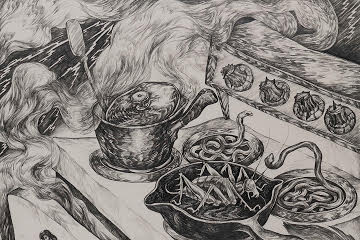 This has been an extraordinary time - a time which has us all in lockdown and which has given us pause to really get to know our bubble’ spaces in intimate detail.

With everyone home all day and night, some families will be feeling the pressure and some will be lapping up the time spent at home. But it’s probably fair to say that for all of us lockdown has made us see our confined home environments with something of an overfamiliarity

During this time I’ve been thinking about artists who use their homes as subject matter and a number of works in the Hawke’s Bay Museum’s Trust collection by artists who make work out of their domestic environments.

Sylvia Siddell (Lady Siddell ONZM) is one such artist, who is well known for making extraordinary works out of ordinary objects from around the home. One example of this is Fiery Furnace,1982 which was purchased for the collection by the Museum’s Trust when Siddell exhibited as a guest artist in the same year.

In this pencil work by Siddell, ordinary objects take on a life of their own. Instilled with energy, domestic objects are animated and given a sense of personality. Outwardly familiar objects have been attributed such spirited characters that they seem to demand we form a relationship with them. In this way Siddell makes paintings that we can put ourselves into.

Siddell says she likes to portray objects as if every tiny bit is seen for the very first time. Her work has the power to remove the veil of convention from our view, revealing what might be uncomfortable, joyous or a struggle lying just below the surface.

Typically Siddell’s work has been given a feminist interpretation, although perhaps in more recent years the gender association has shifted and this bias no longer dominates. It is clear however that, whatever gender, it is the power of artists to reflect critically on the everyday.

Sylvia Siddell is a renowned artist who spent her early years in Auckland, where she was taught by artist R. N. Field. Testimony to the strength of the Museum’s Trust collection, is that it also holds a number of works by Field, which are an asset to the collection as is Siddell’s work.

Other works in the collection that explore the domestic, are works by artists such as Murray Ball, Philip Trusttum, Christopher Perkins, Juliet Peter and Dick Frizzell among others.

And what a rich collection it is. As we hunker down for the remainder of the lockdown what better thing to do that take a look at the Trust Collection and see for yourself its richness, depth and quality.