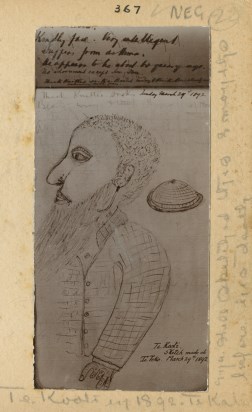 On exhibition at MTG Hawke’s Bay is a shark tooth earing belonging to Te Kooti of Rongowhakaata iwi. He was born in 1832 at Pa-o-Kau, inland from Turanganui-a-Kiwa, Gisborne.

Te Kooti based his life on the teachings of the Old Testament, he founded the Ringatū Christian religion still practiced today, was a man of peace and also a resourceful buisnesman.  He was driven into hostility by the actions of others.

Te Kooti owned schooners that successfully traded between Tūranganui-a-Kiwa and Auckland undercutting the monopoly of Pākeha businessmen, in particular J.W.Harris, a trading rival.

Local Māori chiefs and Captain Read, principal storekeeper at Tūranganui-a-Kiwa, jealous of the mana and success of Te Kooti conspired against him. They spread false rumours linking Te Kooti to Hauhau, supplying gunpowder to Maori to fight against the land grab wars, spying against the government, all with the aim of exiling him. On 5 June 1866, Major Biggs and Captain Wilson deported Te Kooti to the Chatham Islands as a Hauhau prisoner on fabricated charges of espionage. Just prior he had joined government forces in defeating the Hauhau at Waerenga-a-Hika in November 1865.

Wrongfully imprisoned and learning his lands had been stolen, Te Kooti turned to the Bible and founded the Ringatū (upraised hand) faith. The Old Testament provided solace, promising exiles a return to their homelands.

Te Kooti escaped by peacefully seizing the schooner Rifleman. He liberated 297 prisoners, 71 of them children imprisoned for being squatters on their own lands.

Arriving south of Gisborne at Whareongaonga on 9 July 1868, Te Kooti handed a letter to the crew saying the Lord had intervened to deliver his people from captivity and asking to be left in peace. On 12 July 1868 Major Biggs demanded that Te Kooti and his followers surrender. Te Kooti repeated his request to be left alone.

Major Biggs, Captain Westrup, and Colonel Whitmore assembled forces to capture Te Kooti. On 20 July, Te Kooti ambushed Westrup’s forces forcing them into retreat, repeating this at Te Kōneke, Tūranganui-a-Kiwa. On 8 August Te Kooti defeated Colonel Whitmore. He later, attempting to regain possession of his stolen land, killed many Māori and Pākehā involved in the sales. The government labelled him as a slaughterer.

Te Waru Tamatea (a high-ranking rangatira from Wairoa), whose son had been killed by Major Biggs, asked Te Kooti to seek utu, revenge. In November 1868, Major Biggs and about 60 people of all ages in the Pākehā settlement and adjacent kāinga, Māori settlements, were killed – leading to a £5000 bounty for Te Kooti.

Te Kooti retreated to Te Urewera, continuing to protest against government land grabs. He built Waho-o-Te Rangi, the first Ringatū meeting house in Whāngārā, east of Tūranganui-a-Kiwa. In Te Kuiti, he also built the meeting house Tokonganui-a-Noho to thank Maniapoto for hiding him from the government.

The New Zealand Government pardoned Te Kooti in 1883 and released the bounty on his head – on condition he did not return to Tūranganui-a-Kiwa, and in 1891 gave him land at Wainui, Whakatāne, where he established a Ringatū marae. He died 17 April 1893.